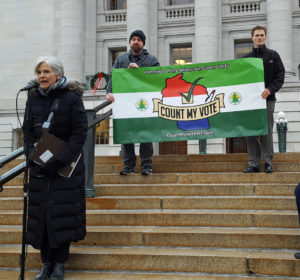 The cost of Wisconsin’s recount of the presidential vote is on track to end up costing almost $2 million less than originally estimated.

Wisconsin’s county clerks said the recount done last month would cost them up to $3.9 million, while Green Party presidential candidate Jill Stein’s campaign was asked to pay $3.5 million to the state before the process could even begin. With 70 of 72 counties reporting their final bills to the state in recent days, the Wisconsin Elections Commission says it will currently end up costing the Stein campaign just over $1.8 million.

Kenosha and Brown counties have not yet submitted their final costs to the state. Those two counties originally estimated the recount would cost them a combined total of $368,757.

During a stop in Madison Tuesday to announce a national election integrity campaign, Stein said the discrepancy was not unlike economic roadblocks her campaign faced in Michigan and Pennsylvania when seeking recounts there. “It’s not the only instance in which we the voters were told that if we wanted to have a verified vote…this was just going to cost us an obscene amount of money,” she said, during a small rally on the steps of the Wisconsin Capitol building.

“It seemed like this was part of a broader resistance to transparency and accountability in our vote…that there was an effort to really financially intimidate voters against standing up to challenge the vote,” she said.

Stein reaffirmed her pledge to use any refund her campaign receives from the state to help pay for ongoing election integrity efforts the Green Party will pursue, after legal battles in other states are resolved. Those could include campaigns to replace voting machines, and to ensure automatic audits of election results and recounts of close races.