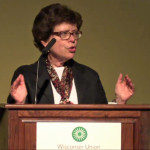 UW-Madison Chancellor Rebecca Blank has requested a review in the UW System’s admission process, in response to a student’s effort to start an “alt-right” white supremacist group on the Madison campus.

Blank did not name the student in her statement, but the Wisconsin State Journal reports he is 33-year-old Daniel Dropik, who was sentenced to five years in federal prison after setting fires at two African American churches, in Milwaukee and Lansing, Michigan in 2005.

In her statement, Blank noted that “the UW System’s admission application does not ask for or allow us to consider a student’s criminal history as part of the admissions process. This is intended to ensure that students who have made mistakes, but paid their debt to society, are not prevented from accessing education. In light of this situation, I will request that the Board of Regents consider a review of this policy.”

According to The Badger Herald, Dropik handed out slips of paper encouraging students to “fight anti-white racism on campus” by joining a Madison chapter of the white nationalist American Freedom Party. “The American Freedom Party (formerly American Third Position) is a political party initially established by racist Southern California skinheads that aims to deport immigrants and return the United States to white rule,” according to the Southern Poverty Law Center.