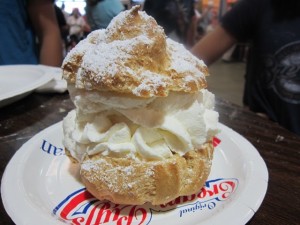 The governor announced Friday that his upcoming budget will include a request for $6 million to expand and renovate the Cream Puff Pavilion at State Fair Park in West Allis. He says the move will create a better visitor space inside the pavilion, along with opening additional areas for product lines to be available on a year-round basis and a new training center for bakery internships.

“The Original Cream Puff is an iconic staple of the Wisconsin State Fair, and something people look forward to every year. The modernization of the Cream Puff Pavilion at State Fair Park is something Wisconsin families and visitors to our state will be able to enjoy for years to come,” the governor said in a statement.

The cream puff has been a staple of the State Fair since 1924. Almost 50,000 are made each day during the fair’s annual run.