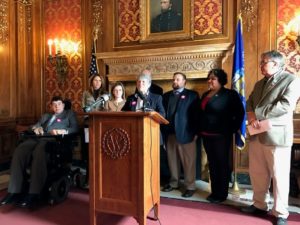 Democrats from his House district are calling on Speaker Paul Ryan to spare Planned Parenthood. Ryan wants to link defunding Planned Parenthood to the replacement of Obamacare, something state Senator Janis Ringhand said will harm women in Wisconsin.

“If Planned Parenthood were to close down in Kenosha, there is not the infrastructure or capacity to pick up the health care services they currently provide,” said state Representative Tod Ohnstad.

Representative Corey Mason said Federally Qualified Health Centers also won’t be able to fill the gap if Planned Parenthood is shut down. “It literally takes an act of Congress to get an FQHC in your district,” Mason said. “They don’t hand them out readily.”

The lawmakers have sent letters to Ryan and Governor Scott Walker on behalf of more than 50,000 state residents who receive services from Planned Parenthood of Wisconsin.

Mason was asked about assertions made by some of Ryan’s constituents, that they have experienced difficulty contacting his offices with concerns on the issue. “I realize that he’s the Speaker of the entire House of Representatives and he’s got additional duties, but that doesn’t mean that we should be hearing from constituents that they can no longer reach their member of Congress.”