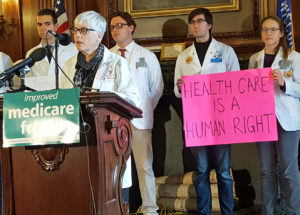 As Republicans in Congress push to repeal and replace the Affordable Care Act, health care professionals in Wisconsin are warning about the consequences of the move.

During a news conference at the Capitol Monday, Dr. Jeff Huebner of Madison, board chair of the National Physicians Alliance, said that a full repeal will break a promise made to many Americans – that everyone can have access to high quality healthcare, regardless of their ability to pay or the presence of any pre-existing condition.

“Health care is a human right for all, and not a privilege for a few,” argued Dr. Melissa Stiles with Wisconsin Physicians for a National Health Care Program.

Many Republicans have said the ACA will be replaced, but Huebner argued people need to read deeper into those promises. “Their version of so-called replace would weaken protections for pre-existing conditions, and reduce affordability of health care for working families, seniors, and those most in need,” he said.

Huebner also warned that possible plans for Medicaid vouchers and block grant funding for programs could lead to higher co-pays and premiums, while reducing benefits. “This is political malpractice, and we must call them out on it,” he said.

While Republicans have not outlined their specific plan yet for repealing the ACA and what will replace it, House Speaker Paul Ryan (R-WI) said Monday that they expect to have a bill within the first 100 days of President-elect Donald Trump taking office.

In an interview with Fox 6 Milwaukee, Ryan said the GOP will make certain that no one currently covered by the ACA will lose coverage during the transition period. “However long that transition’s going to take, we’re going to make sure the rug doesn’t get pulled out from under people,” Ryan said.

Trump has said he will reveal his plan for health care coverage after the Senate confirms his nominee for Secretary of Health and Human Services.