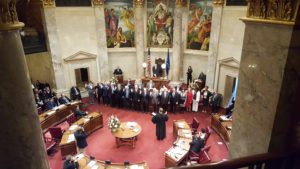 Wisconsin Republicans hold historic majorities in the state Senate and Assembly. At the Capitol in Madison, the legislative session officially got underway with swearing-in ceremonies for lawmakers.

“Your constituents have entrusted you with the great privilege and responsibility of representing their interests,” said Senate Majority Leader Scott Fitzgerald, whose Republicans hold a 20-13 majority in the chamber. “As members of the legislature, we are too often characterized by our divisions, but all of us here today are united by our shared desire to make our state a better place.”

Republicans also have a 64-36 majority in the state Assembly. It’s the first time the GOP has controlled the Wisconsin legislature and the governor’s office with a Republican also in the White House, since 1970.