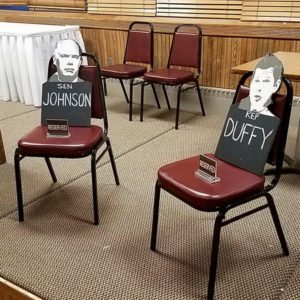 More than 100 people attended a town hall style meeting in Wausau Thursday night, but none of them were the elected officials invited.

Citizen Action of Wisconsin held the meeting focused on the Affordable Care Act and invited both Representative Sean Duffy and Senator Ron Johnson at their offices in Wausau and Milwaukee. Neither attended.

“I bet you could ask everybody in here and they’d start telling you, and telling the Senator and the Congressman, quit playing with people’s lives and using them for political fodder just to get votes,” said Jeff Smith, an organizer for Citizen Action.

“These are the sorts of things that anyone elected should expect to happen,” said Smith. “If they’re not willing to actually schedule places in public where they can be heard, or people can be heard by them, then we’ll probably keep scheduling them for them.”

Smith also said he wants to get the offices of the Congress members involved in planning a future event. The event seemed to attract only those in favor of keeping Obamacare as law. Smith said that was due to the quick nature of the meeting’s organization.

“As you know, with Facebook and emails, we end up talking in a chamber,” said Smith. “We would like to break out of that bubble, no doubt about it, but this idea occurred on Monday when we realized there were no town halls scheduled, and so we had just a couple days to get out the word and we did the best we could.”

Senator Tammy Baldwin was not invited to the meeting. Smith said that organizers already knew her stance on the issue, and were looking for further answers from the Republicans as to what comes next.