You are here: Home / Sports / Bucks head into break with 3-game win streak 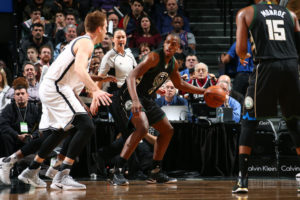 The Milwaukee Bucks head into the NBA’s All-Star break with a three-game winning streak.  They knocked off the Brooklyn Nets 129-125 at the Barclays Center in New York on Wednesday night.

Brook Lopez poured in 36 points and blocked eight shots but couldn’t prevent the Nets from losing for the 14th straight game, including a franchise-record 16th straight time at home.

The win was also the eighth straight for the Bucks against Brooklyn.  Michael Beasley added 14 points and Tony Snell had 10 points, six rebounds and three assists.