You are here: Home / Brewers / Carter agrees to one-year deal with the Yankees 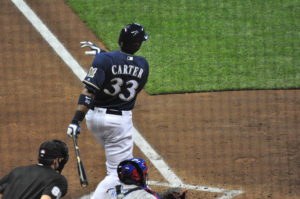 Free agent first baseman Chris Carter, who tied for the National League home run lead last season with the Milwaukee Brewers, has agreed to a one-year, $3.5 million deal with the New York Yankees on Tuesday.

The new deal is subject to Carter passing a physical and includes a $500,000 signing bonus, a $3 million salary and $500,000 in performance incentives.