You are here: Home / News / ‘Day Without Latinos’ march draws thousands to Milwaukee 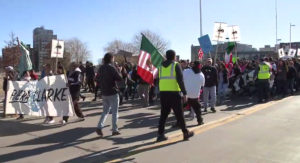 Thousands of people filled the streets of Milwaukee Monday, as part of an effort to highlight the impact Latinos and other immigrants have in communities around the state. Demonstrators marched through the heart of downtown Milwaukee during the Day Without Latinos event – and then held a rally on the steps of the county courthouse.

Several speakers talked about the need to push back against renewed efforts by the federal government to crackdown on those who enter the country illegally. There was also resistance to recent executive orders from President Donald Trump designed tighten border security and to penalize so-called sanctuary cities.

City leaders in both Milwaukee and Madison have taken steps in recent weeks to stress that local police resources will not be used to help enforce federal immigration actions.