You are here: Home / Badgers / Desbiens named WCHA Defensive Player of the Month 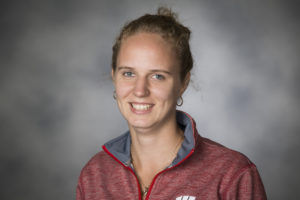 Wisconsin women’s hockey goaltender Ann-Renee Desbiens was rewarded Friday for her tremendous play in the Badgers’ net, as the senior was named the WCHA Defensive Player of the Month for January.

This marks the first time this year that Desbiens, the reigning WCHA Player of the Year, has collected defensive player of the month honors from the league.

Desbiens started six of UW’s seven games in the month, posting a 6-0-0 record while recording three shutouts, which paced the NCAA during January.

The La Malbaie, Quebec native posted a save percentage of .962 in January (2nd best in the country), while her goals-against average of 0.67 paced the NCAA.  Desbiens’ six wins led the WCHA and ranked second in the NCAA during January.

Desbiens and the top-ranked Badgers travel to Bemidji, Minnesota, to take on Bemidji State this weekend.