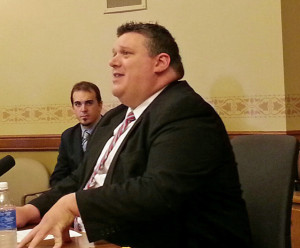 Lawmakers are hoping to advance a proposed constitutional amendment this year that would eliminate the office of state treasurer in Wisconsin.

The duties of the office have slowly been taken away, to the point where the main duty of the treasurer right now is to sit on the Board of Commissioners of Public Lands. Current state Treasurer Matt Adamczyk told a legislative committee Wednesday that the time has come to get rid of it completely. “It is my belief the treasurer’s office of the state of Wisconsin is outdated, not needed, and quite simply a waste of taxpayer money,” he said.

State Representative Mike Schraa (R-Oshkosh), a sponsor the amendment, testified that it’s about saving money for the state. “To have a position that his only responsibility is two 15-minute phone calls a month…that’s just not efficient government,” he argued.

The amendment passed the Legislature last session on a bipartisan vote, and is on second consideration. If approved by lawmakers, it would go to a statewide referendum.