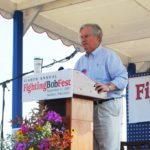 Democrats in Wisconsin are praising the late Progressive activist and former candidate for governor and U.S. Senate Ed Garvey. The 76 year-old founder of “Fighting Bob Fest” had been diagnosed with Parkinson’s Disease. He died Thursday following a brief stay at a nursing home in Verona.

“Today we lost a Wisconsin icon and a brilliant national champion of labor and progressive causes,” said U.S. Representative Mark Pocan. “He laid down an admirable path to follow for all of us who believe in fighting for the underdog and staying involved in our democracy as informed and vocal citizens.”

Garvey was a Burlington native who graduated from the University of Wisconsin and, following service in the U.S. Army, from UW Law School. Garvey served as executive director in the National Football League Players Association from i971 until 1983, including walkouts in 1974 and 1982.

Garvey later served as an assistant attorney general to former state Attorney General Bronson La Follette, and then ran his own labor law practice. Garvey also ran unsuccessfully as a Democrat for the U.S. Senate in 1986, and for governor in 1998. “We can only dream of what might have been, had Ed been elected governor of Wisconsin,” Madison Mayor Paul Soglin said. “Ed would tell us to stop dreaming and get to work.”

Garvey later started the annual “Fighting Bob Fest,” with a blog and website of the same name. “Ed understood how important it is to pass on to the next generation our proud, progressive tradition in Wisconsin,” said U.S. Senator Tammy Baldwin in a Facebook post. “Each year, Ed brought progressives together from across the country at Fighting Bob Fest to share this tradition and give people a voice.”