You are here: Home / Crime / Courts / Four wounded in east side Madison shooting 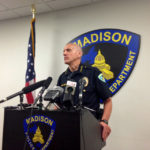 An investigation is underway into the shooting of four men on Madison’s early Sunday. All four suffered what were apparently non-life-threatening injuries. Police chief Mike Koval said it began as a fight in Dodge County Saturday night, escalating hours later on Madison’s east side.

None the men who were shot is cooperating. “We’re continuing to run into obstacles because our victims, quite frankly are let’s say less than forthcoming in cooperating with the investigation,” Koval said.

Koval is expressing concern over gun violence in the city. “I feel like we’re pacing ahead of ourselves from where we were last year,” he said. “I will be going to an awful of visitions over the course of the year unless we can do something definatively to turn this momentum in a different direction. There’s no doubt in my mind it’s gonna get worse.”

One of the men who was wounded in the shooting has been released from the hospital. Koval said the shooting culd be gang related, something family members of the victims dispute.