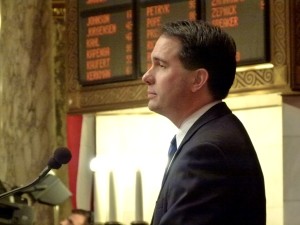 While Governor Scott Walker has been previewing parts of his two year spending plan for the past several weeks, lawmakers and the rest of the state will get their first full look at the proposal later today.

The governor is set to release his proposed budget during a 4 p.m. speech before a joint session of the Legislature at the Capitol.

Walker has stressed for weeks that his budget is focused on developing Wisconsin’s workforce, which he argues is the main priority he’s heard from businesses across the state. “Back when I was first elected, it was jobs, jobs, jobs,” Walker told the Wisconsin Counties Association during a speech on Tuesday. “Now it’s really about workforce, workforce, workforce…it’s about not just finding, but training, educating, preparing people all across the state to take on those jobs.”

This will be Walker’s fourth state budget he’s introduced as governor, and will help set the stage for an expected attempt to seek a third term in 2018. Walker has already detailed several major initiatives that will be included in the package – such as a tuition cut for UW students and changes to the state’s welfare programs.

Unclear at this point is how Walker plans to tackle a projected $1 billion shortfall in the state transportation fund. He has been adamant in his opposition to raising taxes or fees to help close that gap, unless it’s equally off-set in another area of the budget.

Assembly Speaker Robin Vos (R-Rochester) has argued all options should be on the table as lawmakers work to address the road funding issue, setting up a potential showdown similar to one that held up passage of the 2015 state budget.