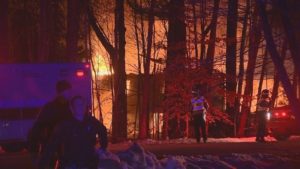 A family is still unaccounted for after a fire destroyed their home early  this morning.

Styczynski said five people, a couple and three children, were living in the home. “We don’t know where they are currently; they could be on vacation,” Styczynski said. “… It will be investigated.”

The fire started around 1 a.m. Friday. Styczynski said a neighbor noticed the fire and called 911.

It took about 30 minutes to get the fire under control, Styczynski said. “We had mutual aid and automatic aid coming right away. So, we had plenty of resources.”

Crews pumped 3 feet of water from the home’s flooded basement. No one has been able to enter because of its instability.

Fire crews have called in backup to determine if the structure is safe to enter.

The cause of the fire is still under investigation. Officials are looking for any information that may lead them to the family’s location.