You are here: Home / News / Humphries accuses Holtz of lying about changes to DPI proposal 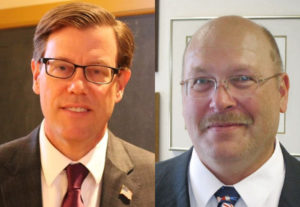 State Superintendent candidate John Humphries says one of his opponents is lying about the facts surrounding a meeting the two had in December.

A document released by Humphries earlier this week claimed Lowell Holtz proposed that the candidate who dropped out of the race could get a six-figure job at the Department of Public Instruction, if the other wins in April. The two are seeking to challenge current state Superintendent Tony Evers.

The proposal has faced a number of criticisms since it was made public, with some questioning whether the arrangement would even be legal under the authority of the state’s chief of schools.

Holtz claimed this week that the document had been altered by his opponent, but Humphries said during a press conference at the Capitol on Friday that embedded data shows any changes were made by Holtz the day he released a version of the document to members of the media. “Dr. Holtz is lying, and modified his original proposal in a poorly executed attempt to change the fact of his initial proposal,” Humphries said.

The Holtz campaign did not immediately respond to a request for comment on the latest allegations from his opponent.

The two met in December at the suggestion of an unidentified member of the business community. Despite arguing he had “nothing to to hide” on Friday, Humphries once again declined to identify that person, saying they wish to remain anonymous.

A three-way primary in the state superintendent race is set for next Tuesday.