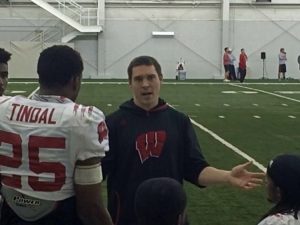 Leonhard served as Wisconsin’s defensive backs coach last season and his impact on the Badgers’ secondary was immediate.  His unit was instrumental in the Badgers collecting 22 interceptions, a total that ranked second in the FBS.  It marked Wisconsin’s highest output since 2002, when Leonhard himself recorded a school-record 11 of UW’s 22 picks.

The secondary contributed to an overall effort that saw the Badgers finish the season ranked fourth nationally in scoring defense (15.6 ppg), seventh in total defense (301.4 yards per game), third in rushing defense (98.8 yards per game) and tenth in passing efficiency defense (106.9).

A 2015 inductee into the UW Athletics Hall of Fame, Leonhard arrived on campus in 2001 as a 5’8 walk-on and left four years later as a three-time first-team All-American.  He played in every game of his four-year career, including each of the last 39 as a starting safety, on the way to becoming one of the best defensive players in school history.

He matched UW’s school record with 21 interceptions in his career, the fourth-most in Big Ten history, and finished with 50 passes defended, 25 of which came during his breakout sophomore season in 2002.  His nation-leading 11 interceptions that year tied the Big Ten’s single-season record.  That performance led to Leonhard becoming the first sophomore to be named Wisconsin’s team MVP since 1947.

AUDIO: Leonhard on his only season as DB’s coach in Madison :10

AUDIO: Leonhard says he learned more than his players in his 1st year as coach :14