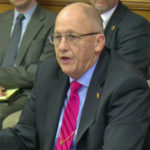 “There’s no question in our mind that it is a safe and secure environment that focuses on not only program development for these young people, but also education,” Litscher told the Assembly Corrections Committee during an informational hearing on Tuesday.

The Lincoln Hills and Copper Lake facility is the subject of an ongoing FBI investigation into allegations of inmate abuse.  “They’ve been documented, and I’m not here to do that, but I’m here to say to you that under new leadership, that has changed,” Litscher said.

He said new policies include better training and body cameras for guards, better psychological services for youth inmates, along with efforts to decrease – though not eliminate – things like solitary confinement and pepper spray.