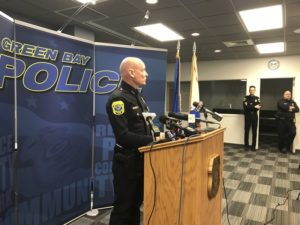 Two Green Bay Police officers have resigned amid an internal investigation of misconduct. Chief Andrew Smith addressed the public about the allegations during a press conference at police headquarters on Friday.

The allegations of harassment and improper remarks were brought to the department’s attention on December 13, 2016 by an officer that worked within the department.

An investigation was initiated that day.

“Specifically there were two individuals that we believe were chiefly responsible for most of the harassment, most of the improper conduct. Those two individuals were summoned to my office that day and I assigned them home on administrative leave without public contact and without any further contact with the police department,” said Smith.

Smith says the misconduct was within the department, where one officer was mistreating another officer, and did not involve the public.

“I think a lot of the stuff that was said started off as just general joking around, maybe that got out of hand. I think there were some other folks who didn’t like particular individuals working with them so they would say things in a demeaning or derogatory manner.”

Some of the improper remarks were racial at times and the misconduct likely went on for a year and a half.

At the beginning of January, Smith met with the two officers who were placed on leave, and took back their gun, badge, police I.D. as well as their ability to do police work in Wisconsin.

Details and officers names were not disclosed due to the investigation being ongoing.

“I think it’s important for the community to know that when we find misconduct, we will take care of it, handle it, investigate it and hold those people accountable,” said Smith.

Smith reiterated that the department will not tolerate this kind of behavior and is committed to professionalism, transparency and providing fair and unbiased police service to all the citizens.

Another “handful” of officers could face possible discipline. The investigation could take another several months to be completed.