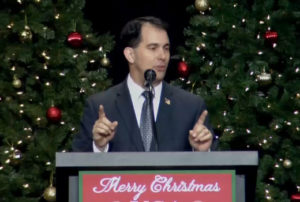 Gov. Scott Walker speaks at a rally for President Trump in December, 2016.

If President Donald Trump’s first pick for U.S. Labor Secretary falls through, a Wisconsin Congressman says there’s speculation that Governor Scott Walker could be in line for the position.

The confirmation process for current nominee Andrew Puzder has stalled, with hearings being pushed off several times amid questions about him divesting his financial interests in the private sector. If Puzder is not confirmed, U.S. Rep. Mark Pocan (D-WI) says there are rumors that Walker could be lining himself up as a possible replacement.

During a press conference Monday, the Madison Democrat pointed to the governor’s visit to the White House late last month, where he met with Vice President Mike Pence and discussed expending his signature law overhauling collective bargaining for public sector workers. There was also a feud on Twitter last week with U.S. Senator Tammy Baldwin, which Pocan described as similar to something the President might engage in. “To me, it makes sense,” Pocan argued.

During a stop in Green Bay Monday, Walker denied he’s looking for a cabinet position – restating a position he’s held since Trump was elected in November and recounting advice he received from former Governor Tommy Thompson, who was Health and Human Services Secretary under President George W. Bush. “Thompson told me his worst day as governor was still better than his best day in the cabinet,” Walker said.

If he’s running for anything, Walker said it will be a third term as governor. Although, he says a decision on that will wait until after his budget is complete.