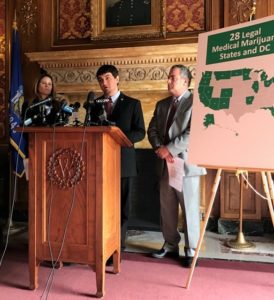 Steve Acheson is an Iraq War veteran who calls his first use of medical marijuana “an epiphany” for treating his pain and PTSD. “Almost the instant that the drug entered my body, I could just feel everything relaxing, and the pain going away and the anxiety going away,” said the UW Platteville graduate. Acheson said he used marijuana to wean himself off of myriad painkillers and other medications that were prescribed for his PTSD diagnosis and multiple back surgeries from an injury sustained while he was deployed to Iraq.

Dr. David Olive is a Madison surgeon and a lung cancer patient who says he’s found relief from pain with medical marijuana. “There’s certainly good data that shows that it works, that it’s safe and that we ought to be using it in specific diseases for medicinal purposes,” Olive said.

Both men spoke at a press conference at the Wisconsin Capitol on Monday, as two Democratic legislators outlined their proposals to allow Wisconsin residents like Olive and Acheson to obtain cannabis legally for medical purposes.

State Representative Chris Taylor (D-Madison) has authored the Compassionate Cannabis Care Act. Taylor said her bill is not about recreational marijuana, but making it legal medically as in 28 other states and the District of Columbia. “Most of the states on this list have not fully legalized marijuana,” she said. “What we want to do here is stop suffering of patients, and make sur patients are not criminals.”

Taylor predicted many Republicans will have a hard time opposing medical marijuana, because so many Wisconsinites have friends or family members suffering from medical conditions that could benefit from it.

If Taylor’s legislation represents a step too far for legislators, State Senator Jon Erpenbach (D-Middleton) has written a resolution that could go to a statewide vote as an advisory referendum. He said that would allow voters to weigh and provide lawmakers with insight into public attitudes.

A July 2016 question by the Marquette Law School Poll found 59 percent of respondents in favor of legalizing marijuana for medical use.

At Friday’s press conference, Erpenbach said Wisconsin Governor Scott Walker has indicated in the past that if medical marijuana were to become legal in the state, voters would have to weigh in on the issue. “Here’s a chance for Governor Walker to put his money where his mouth is,” Erpenbach said. “If he can’t support passage of the referendum at the very least we hope the governor can support placement of the referendum on a ballot.”

But Walker, who met in Green Bay on Monday with state sheriffs and deputy sheriffs, didn’t sound too supportive. “Sheriffs across the state have said that they’re very concerned about a gateway,” Walker said. “They’re very concerned that would open the door towards a gateway at a time when we already have a crisis with opioid and other abuse in this state.”