You are here: Home / Sports / Brogdon powers Bucks past Celtics 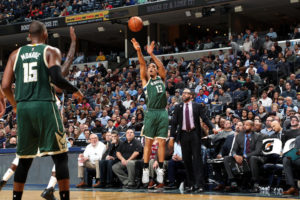 NBA Rookie of the Year candidate Malcolm Brogdon scored three key baskets and dished out a pair of assists in the closing minutes last night, powering the Milwaukee Bucks to a 103-100 victory over the Celtics in Boston.

The biggest basket came when Brogdon hit a fadeaway jumper with 3.9 seconds left to put the Bucks up by three points.  Marcus Smart’s three pointer at the buzzer missed badly and the Bucks held on for the win.

Back-to-back road wins are hard to come by, but the Bucks earned victories in Charlotte and Boston, ending the Celtics four-game winning streak and knocked Boston from the top perch in the Eastern Conference.

The Bucks (39-36) kept pace with Atlanta in their race for the 5th spot in the Eastern Conference playoff race after the Hawks won in Philadelphia on Wednesday night.  The Bucks are two games in front of Miami and Indiana.

Brogdon finished with 16 points.  The Bucks were led by Giannis Antetokounmpo with 22 points and Khris Middleton added 19.

The Bucks return to Milwaukee to host the Detroit Pistons on Friday night.