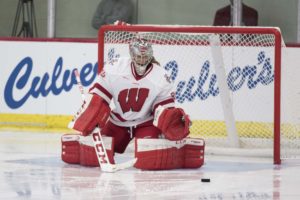 Wisconsin senior goaltender Ann-Renee Desbiens was named the winner of the 2017 Patty Kazmaier Memorial Award, given annually to the top player in women’s NCAA Division 1 hockey.

Desbiens is the third goaltender and the fifth player from Wisconsin to win the award.  Other Wisconsin winners of the award included, Sara Bauer (2006), Jessie Vetter (2009), Meghan Duggan (2011) and Brianna Decker (2012).

Desbiens is 29-1-4 with 17 shutouts this season.  Her goals against average is 0.67 and her save percentage is .965.  Desbiens broke the NCAA career mark for shutouts back in November and has been extending that record ever since.  She has 55 career shutouts, 12 more than the previous record.