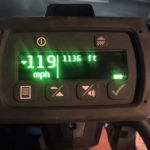 A Dane County Sheriff’s deputy working a traffic grant deployment over the weekend stopped a driver traveling 119 mph in a 55 mph zone in Madison. The stop occurred at 12:55 am on Saturday on the westbound Beltline highway near Old Sauk Road.

The 24-year-old Madison man stated he was traveling at such a high speed because he had to go to the bathroom.

The citation will cost the driver $515.50 and 6 demerit points on his driving record, along with a mandatory court appearance. Divers who accumulate 12 or more demerit points within a 12-month period will have their driving privilege suspended.

Excessive speed is one of the leading causes for fatal and serious injury traffic crashes. Additional traffic enforcement to prevent these crashes is funded through the Wisconsin Department of Transportation, Bureau of Transportation Safety. The next deployment is scheduled for Thursday, March 16th.