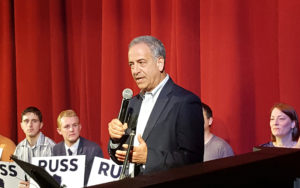 Just months after losing his bid to reclaim a seat in the U.S. Senate, Democrat Russ Feingold is jumping back into political advocacy work.

Feingold on Wednesday announced the creation of LegitAction – a non-profit group he says will work to reform campaign finance laws, abolish the Electoral College, protect voting rights, and fight for the independence and credibility of the U.S. Supreme Court. “Our group is going to be attacking these attacks on the legitimacy of our government that really makes people feel that the system is rigged,” he said.

Feingold said the group will use social media, email, and other methods to reach out to many of the grassroots advocates who have become active after the election of Republican President Donald Trump, and connect them with national groups working on similar issues. He said that will help to firmly meet the agendas being offered by the right and corporate America.

Feingold previously operated his Progressives United group ahead of his last U.S. Senate race, which was focused on overturning the controversial Supreme Court decision in Citizens United that allowed corporate spending in political campaigns. He then lost in November to U.S. Senator Ron Johnson (R-WI), in a rematch of the 2010 race that saw him ousted from the Senate.

In an interview with WRN, Feingold dismissed a question about whether the formation of this new group is a sign he plans to run for office again someday. “It has nothing to do with running for office,” he said. “Believe me.”