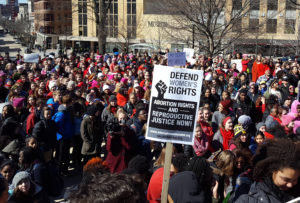 A day without women in Madison, as about 1,500 people rallied on the steps of the state Capitol building Wednesday afternoon.

The demonstration was one of many taking place around the world, in observance of International Women’s Day – an annual commemoration of the achievements of women and a recognition of the struggles they face. Also billed as “a day without a woman,” many women were encouraged to leave work or strike for the day to highlight the effect their absence has on their workplace.

The crowd at the state Capitol building was made up largely of UW-Madison and area high school students.

Speakers at the event highlighted many of the issues facing women, including what they described as attacks on reproductive health care under a Republican president and Congress, along with the ongoing fight for pay equity in the workplace. “By connecting our struggles and fighting back together, we are powerful, and we can begin to win,” said one speaker. “Today is a day for demonstrating that power – our collective power, the strength we have when we come together.”

Wednesday’s rally is just the latest in what has been described as a growing national women’s movement, as groups gear up to fight against a Republican agenda in Congress they argue will reduce access to health care for women and chip away at other rights. A similar demonstration in January at the state Capitol brought in a crowd estimated to have been between 75,000 and 100,000 people.