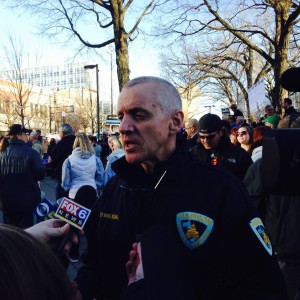 Following a hearing, legal argument, and deliberations, the Madison Police and Fire Commission has found Madison Police Chief Mike Koval engaged in misconduct, but the misconduct does not warrant any disciplinary action.

This comes after complaints filed against Koval in August 2016, including one from Tony Robinson’s grandmother Sharon Irwin. The complaints filed by Irwin and Shadayra Kilfroy-Flores cited rules and standards of the Madison Police Department and City of Madison were violated in three incidents.

One complaint was filed after a city council meeting got heated in June 2016. Koval admitted to calling Sharon Irwin a “raging lunatic.” The PFC, which referred to the incident as the “Stairwell Incident,” acknowledged the comment made was a violation of Standards of Conduct, but that the misconduct did not warrant any disciplinary actions.

In another instance, referred to by the PFC as the “Gun Gesture Incident,” Irwin and Kilfroy-Flores say Koval’s demeanor became aggressive, and they feared for their safety. The complaint states Kilfroy-Flores perceived a motion of Koval’s hand toward his hip as a threatening gesture to his sidearm. The PFC says they were not persuaded that Koval made that gesture.

Lastly, the PFC refers to an incident when Irwin took her turn testify to the Council. When she did not adhere to the 3-minute time limit, Koval was said to have struck the desktop he was at with his hand three times to signify Irwin’s time had run. The PFC says this does not violate any Police Department rule or standard.

The PFC said it has three options for discipline when it finds misconduct by a sworn officer: suspension , demotion, or discharge. The commission determined that Koval’s misconduct in one incident does not warrant any of those actions. Irwin and Kilfroy-Flores were asking for Chief Koval to be suspended.