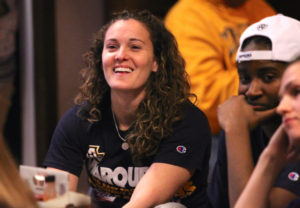 The Marquette women’s basketball team drew the fifth seed in the Stockton Regional and will open NCAA Tournament play on Saturday at 12:30 p.m. (ESPN2) in Coral Gables, Florida against Quinnipiac.

The fifth seed is the highest in program history, after going 9-1 in the last 10 games.  The Golden Eagles (25-7) put together a number of signature wins, beating Oregon State on their home floor, knocking off DePaul three times, finishing 6-0 against top 25 teams and winning the Big East Tournament title.

The Golden Eagles also got to the NCAA Tournament for McKayla Yentz, who is the lone senior on the Marquette roster.

Marquette is 4-9 all time in the NCAA Tournament.  If they advance to the second round, their most likely opponent could be Miami (Fla.).  That’s where coach Carolyn Kieger spent six seasons as an assistant before coming to Milwaukee to take over the Marquette program three years ago.

AUDIO: Carolyn Kieger said they were rewarded for their work :13

AUDIO: Carolyn Kieger said she was as excited and emotional as her players :10

AUDIO: Carolyn Kieger is excited for her team :13