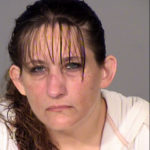 Authorities in Fond du Lac County have ten people in custody and are looking for another who allegedly put more than 15 pounds or over $1 million worth of heroin on the streets over the last two years. A press conference in Fond du Lac Thursday detailed work of the joint investigation.

Fond du Lac Police Chief Bill Lamb says they know the individuals involved were supplying a lot of heroin in the area. He says the quantities of heroin alleged to be involved in the investigation show that this was a significant source of drug trafficking in the City of Fond du Lac and region in general. During the investigation 150 grams of heroin, 7 grams of crack cocaine, firearms, and thousands of dollars in cash were seized.

Deputy District Attorney Dennis Krueger says most of the heroin came from Chicago and was sold in the Fond du Lac, Oshkosh, and Ripon areas.  Officials are still looking for Jody Wegener and anyone who knows of her whereabouts is asked to contact police.