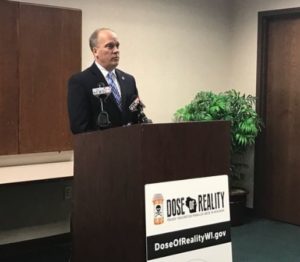 The Wisconsin Department of Justice says a new training tool could help prevent pharmacy robberies around the state.

Attorney General Brad Schimel, along with members of the Pharmacy Society of Wisconsin, toured the state to unveil the training program, which is part of a continued effort to fight the spread of crimes tied to opiate addictions in Wisconsin through the state’s “Dose of Reality” campaign.

During a stop in De Pere, Schimel said there’s a problem in Wisconsin that needs to be address. “We are also one of the leading states on pharmacy robberies. In 2015 we were number three in the nation, not per capita but raw numbers. We had more than California, Texas, Florida, and New York,” he said.

The Pharmacy Robbery Prevention and Response training was created to deter those kind of robberies. Through a secure website, pharmacy personnel will be able to access a series of recommendations to make pharmacy premises resistant to robberies.
“They might do things, for instance, like a time-delayed safe holding the drugs. If there’s a sign out front that tells a would-be pharmacy robber that there’s a time-delayed safe, they’re not going to rob that pharmacy,” Schimel said.

Other best practices include model opening and closing practices, camera and monitoring placement, and phone etiquette. “And we’re hoping that they’re going to work together, that pharmacies will work with their local law enforcement to do security assessments to make sure that their stores are safe,” Schimel said.

Pharmacists have access to the training immediately and although it is not required, Schimel said it is encouraged to protect the safety of pharmacy employees, customers, and the public.