You are here: Home / Packers / Packers nearing deal with Perry 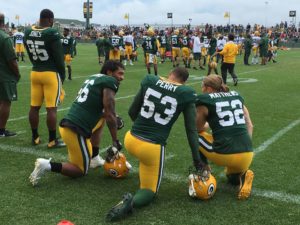 The Green Bay Packers are working out final details, but they’re expected to have a deal with former first round draft pick Nick Perry before the official start of free agency at 3pm Thursday afternoon.

The 26-year-old Perry had been hit with injuries throughout much of his career, but last season he proved he was beyond that.  The Packers outside linebacker missed just two games with a broken hand and played the rest of the season with a club cast on his hand.  He missed only five games over the last three seasons after playing in just 17 of the first 32.

Perry played under a 1-year, $5 million deal last season and registered a team-high 12 sacks, including playoffs.

It was important for the Packers to get a deal done with their top pass rusher before he hit the open market and that’s exactly what they did.