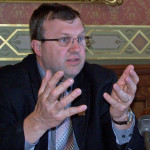 At the request of Neenah city leaders, Pokemon Go players won’t find as many stops in a city park anymore.

Mayor Dean Kaufert said that Niantic, the parent company for the popular game, agreed to eliminate three of the nine stops around Kimberly Point Park and move two others to different locations, because of crowd issues.

And Kaufert said hopefully they won’t have to worry as much about players being in the park after hours. He said Niantic agreed to shut down the stops between 10 p.m. and 4 a.m.

In the months after Pokemon Go debuted last summer, large crowds have been gathering in the park and the surrounding neighborhood.