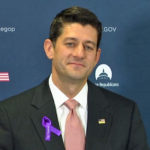 During a press briefing in Washington on Tuesday, the Janesville Republican was also insisting Democrats will dig in their heels on repeal of the Affordable Care Act.

“The Democrats want to go down with a sinking ship. Obamacare is a collapsing law,” Ryan said. “The law is not viable or sustainable. The insurers are pulling out left and right, and the system is collapsing. The deductibles are skyrocketing, the premiums are skyrocketing, and people are left with little or no choice in some instances.”

Ryan did concede that there is going to be a lot of what he called “churning” on the way to the finished GOP repeal and replace package.