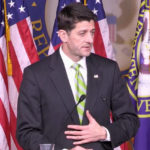 In a major setback for Republican in Congress and the Trump administration, House Speaker Paul Ryan of Janesville has pulled the Republican Obamacare replacement bill from consideration by the House. “I will not sugarcoat this, this is a disappointing day for us,” Ryan said Friday.

The American Health Care Act was circling the drain Friday afternoon, before Ryan announced his decision during a brief press conference. “There is a bloc of no votes that we had that, that is why this didn’t pass. They were a sufficient number of votes that prevented it from happening, and they didn’t change their votes.”

Members of the conservative Freedom Caucus appear to have withheld enough support to prevent passage of the American Health Care Act.

Ryan, who has been focused for years on repealing the Affordable Care Act for 7 years, again predicted a dire future for the health care law, while conceding that it remains the law of the land. as he announces that the Republican replacement plan will not come to a vote

“We were probably doing the Democrats a favor. I think we were doing the architects of Obamacare a favor, by passing this law before it gets even worse. Well I guess that favors not going to be given to them, and it’s going to get even worse,” Ryan said.

Representative Mark Pocan, a Madison Democrat, said Congress should focus on improving the Affordable Care Act. “But to completely throw it out and to put something forward that does the opposite of health care, like the Republican proposal does, just doesn’t pass muster, and I think that’s what we’re finding out today.”

“We have to stay focused on reducing health care costs for all Americans, said La Crosse Democrat Ron Kind, who called the American Health Care Act “not only a missed opportunity, it is bad legislation.”