You are here: Home / Sports / Slow start costs the Bucks against Denver 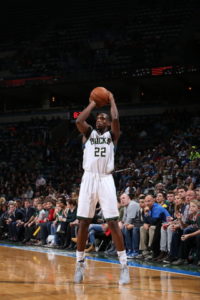 In what has become all to familiar, the Milwaukee Bucks started slow and lost to a team they should beat, falling to the Denver Nuggets 110-98 at the BMO Harris Bradley Center.

Jason Kidd shook up his starting lineup, giving starts to Rashad Vaughn and Malcolm Brogdon, but the result was the same.

Denver (28-33) led by 17 points after one quarter and led by as many as 31 points in the game.  Danilo Gallinari led six Denver players in double figures with 22 points.

The Bucks dropped their second straight game and fell to 1-3 since the all-star break.  Khris Middleton had 21 points and Malcolm Brogdon added 17 points to lead the Bucks.

Giannis Antetokounmpo struggled, hitting 5 of 13 from the field and finishing with 15 points, nine rebounds and four assists.  Matthew Dellavedova who has struggled with his offense of late, scored 15 points, 13 of them in the second half.

The Bucks are back home on Friday night, facing the Los Angeles Clippers.