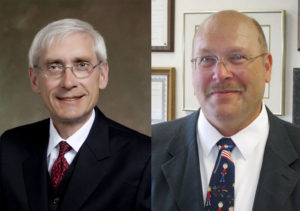 With the election just days away, the two candidates for state Superintendent of Public Instruction met Friday night in their final debate of the campaign.

Current Superintendent Tony Evers and challenger Lowell Holtz addressed a wide range of questions on Wisconsin Public Television, which included discussions of their plans to deal with an achievement gap in public schools, the use of career and technical education opportunities in high schools, and dealing with a declining number of teachers entering the profession.

The debate opened though with a discussion of a letter sent this week by the Whitnall school board, where Holtz previously served as superintendent, which alerted parents about possible campaign-related emails Holtz may have sent using a district account. Holtz defended those messages sent to his wife, saying he did not believe there was anything wrong about them. He argued they were not about seeking donations or help setting up a campaign, and were sent before he was in the race. “At that point, I had not decided to run for office,” he said.

However, Evers said he did believe they violate state campaign laws and an inappropriate use of a taxpayer-funded account.

The two also showed stark differences on issues such as the national Common Core education standards. Evers defended the often controversial guidelines, saying they have made a difference on how students learn in the classroom. “It’s not about memorizing facts…it’s about taking those facts and applying them in real world situations,” Evers said.

Holtz said they have turned teachers into bookkeepers though, as they work to keep up with reporting requirements, and require an approach that’s too broad for districts with different needs. “It’s a set of standards that goes from A to Z, and there is no such set of standards that that’s all you need to know to be successful,” he said.

The two also clashed over a state budget provision, which requires school districts to be fully in compliance with the employee benefit contributions allowed under Act 10 – Governor Scott Walker’s law that overhauled collective bargaining for public employees – in order to access a funding increase. Holtz defended the proposal as simply sending a message to districts that Act 10 is the law of the land, but Evers questioned how it could even be implemented. “It’s a significant issue of overreach by the state to kind of intervene between school districts and their employees…I think it’s a step in the wrong direction,” Evers said.

Evers is seeking a third four-year term as state superintendent. The election is April 4th.