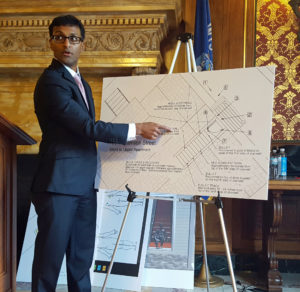 Attorneys for the family of Madison man fatally shot by police say the evidence surrounding his death does not match up with the story told by the officer who killed him.

Monday marked two years since Tony Robinson was shot by Officer Matt Kenny while he was unarmed in an apartment stairwell. Kenny said he was attacked by Robinson at the top of the stairs, but attorney Anand Swaminathan argues physical evidence, along with audio and dash cam video from the scene, tell a different story – one in which Kenny was at the bottom of the stairs when he opened fire, while Robinson was falling down toward him. “Officer Kenny’s story doesn’t work,” he said Monday, during a press conference at the state Capitol building.

Attorneys also criticized how the investigation of the shooting was handled, noting that Kenny was not interviewed by Madison Police as part of an internal investigation, and that he was allowed to review evidence before giving his official statement. Swaminathan said the department needs to stop reflexively moving to defend officers when they are involved in a shooting. The family’s legal team also released multiple documents and video evidence related to the case.

Kenny was cleared of any wrongdoing for Robinson’s death, while the teen’s family settled its lawsuit against the department last month for $3.35 million.

In a statement, Madison Police Chief Koval said he could not comment on a “one-sided” version of the facts that will never be subject to a trial. “To suggest that you have “new” evidence supplied by experts paid by the plaintiffs, should be considered in the context from which it is proffered,” he said.