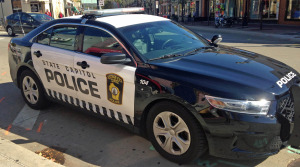 A bill that would making attacking a law enforcement officer a hate crime in Wisconsin faced criticism Thursday, during a public hearing at the Capitol.

State Representative David Steffen (R-Green Bay), the sponsor of the so-called “Blue Lives Matter” bill, said the proposal will help protect those who risk their lives doing their jobs. “We have to be taking…additional steps to show our support and protection for those who protect and serve us every day,” he said.

Democratic state Representative David Crowley (D-Milwaukee) questioned why a profession deserves extra protection though, when hate crime laws typically cover attacks based on characteristics such as race or gender. “As a black man, we’re raising an occupation – something somebody chooses to do – to the level of something I can’t change about myself.”

Steffen said the bill is warranted because officers have been the target of attacks, just for doing their job. He also noted that many of the officers he’s dealt with see their job as more than just an occupation. “It is core to who they are,” he said.

Grant County Sheriff’s Deputy Adam Day testified to his own experience with an attack against him, which was carried out by a man who hated police. “The young man physically attacked me, landing punches to my face and my head – all due to one experience long ago and now his hate for police officers,” Day said.

The legislation is modeled after police hate crime laws adopted by several other states.