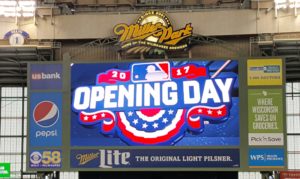 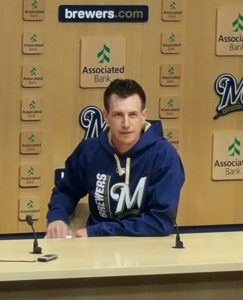 The Brewers will start the season with what’s believed to be the lowest payroll in baseball.  According to Tom Haudricourt of the Milwaukee Journal Sentinel, the Brewers have 17 players making the Major League minimum or around the minimum ($535,000).  Ten players are making a total of about $48.5 million, or more than 86% of the payroll.  Two players, left fielder Ryan Braun ($15 million) and pitcher Matt Garza ($10.5 million) account for about 45% of the total payroll.

The Brewers finished last season with a 73-89 record, but general manager David Stearns said there’s no set number of games that he needs to see his team win this season.

They announced the signing of reliever Jared Hughes, who had been released by the Pittsburgh Pirates.

The Brewers have a total of nine players on their active opening day roster for the first time and manager Craig Counsell will have a number of lineup options to go to.  Counsell said his lineup will change quite a bit, especially early.

The Brewers will start the season with 13 pitchers, two catchers, six infielders and four outfielders.  They do have some flexibility with infielder Hernan Perez, who is also the teams fifth outfielder.  Manager Craig Counsell said his toughest lineup decision for opening day came with not having Perez in his starting lineup.