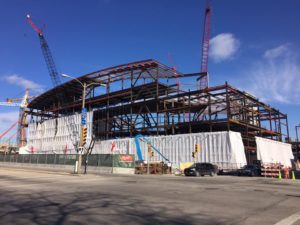 The Wisconsin Entertainment & Sports Center is still under construction, but the NCAA announced today that the new state-of-the-art facility, slated to open in the fall of 2018, has been selected to host NCAA Men’s Basketball Tournament games in 2022.

A joint bid between Marquette and the Milwaukee Bucks was among those accepted, with Marquette serving as the official host for the games.

“This is fantastic news for the state of Wisconsin and another important milestone in the progress of this world-class arena in Milwaukee,” Bucks President Peter Feigin said.  “The BMO Harris Bradley Center was a tremendous host for NCAA basketball for many years and we’re thrilled to continue partnering with Marquette to ensure that tradition continues in the new building.  We look forward to many more exciting announcements as we continue to bring a wide range of entertainment options to our community.”