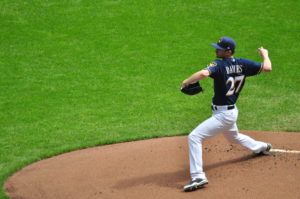 Zach Davies struggled with his control early and it cost the Milwaukee Brewers a 7-4 loss to the Chicago Cubs in their series finale at Miller Park on Sunday.

Davies fell behind in the count and surrendered a two-run double to Addison Russell and a two-run triple to Jason Heyward in the first inning.  Kyle Schwarber led off the second inning with a home run to center field to push the Cubs lead to 5-0 over the Brewers.

Jake Arrieta gave up a three-run homer to Ryan Braun in the third inning, but held the Brewers in check over seven innings to pick up his second win of the season.

Davies dropped to 0-2 and his ERA ballooned to 10.61, but manager Craig Counsell said he saw some positives from the 24-year-old right hander as the game went on.

Davies, who pitched five innings before departing, struggled early last season as well.  Yet he finished 11-7 with a 3.97 ERA in 28 starts.

Domingo Santana also homered for the Brewers, with two outs in the ninth-inning.  The Cubs went to the bullpen again, bringing on closer Wade Davis, who retired Hernan Perez on a first pitch pop-out.

Braun also helped the Brewers with his glove, saving two runs with a diving catch.  He returned to the lineup after taking Saturday off to rest his back.

The Brewers have Monday off.  They’ll open a road trip in Toronto on Tuesday night with Wily Peralta taking the mound for Milwaukee.