You are here: Home / Crime / Courts / Details on conditions of animal cruelty in Crandon 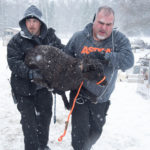 A 52-year-old Crandon woman accused of 156 counts of animal abuse allegedly allowed puppies to be eaten by dogs while her home contained up to 2 feet of dog feces on the floor.

According to the criminal complaint obtained by Newsline 9, a woman who knows Patricia Kirker and is familiar with the conditions of the home said, “Adult dogs are trying to kill any (puppy) litter that is not theirs and the mothers are left to protect them alone.”

Two women, ages 50 and 53 and unnamed in the complaint, provided details of what investigators called deplorable conditions.

The Forest County Sheriff’s Department, with help from the American Society for the Prevention of Cruelty to Animals, seized nearly 40 wolf dogs and some sickly horses from the property on March 17. Some dead animals were also found.

Three days before the seizure, Kirker was charged in a conspiracy to smuggle drugs into the county jail.