You are here: Home / News / Efforts to remove Sheriff Clarke come to Capitol 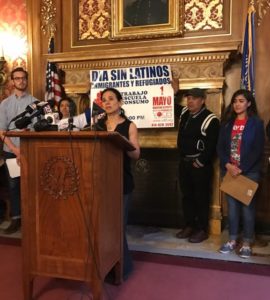 As an inquest into a death at the county jail continues, growing calls for Governor Scott Walker to remove Milwaukee County Sheriff David Clarke from office. Christine Neumann-Ortiz of the immigrant rights group Voces De La Frontera was at the Capitol on Wednesday, delivering a petition calling for Clarke’s removal to the office of Governor Scott Walker.

Neumann-Ortiz said Clarke’s “total disregard for people’s’ human rights” has created “a culture of fear and abuse” at the jail. “He should be removed from office,” she said, adding that Walker has the authority to do that.

Walker said that while a governor does theoretically have the power, “the practice in this state has been to defer, no matter who it is, to the electorate of that given county.” Walker said no governor, Democrat or Republican, has ever removed a constitutional officer such as sheriff from office.

The Milwaukee County District Attorney’s Office has been conducting the inquest this week, into the April 2016 death of inmate Terrill Thomas. Thomas, who was diagnosed with bipolar disorder, was found dead in his cell after going without water or a mattress for 7 days.

“He (Clarke) delights, and takes pride in saying how he has no regard for people’s’ lives or how they’re treated, or the consequences,” Neaumann-Ortiz said. “It’s his mission to promote public safety, and he’s completely undermining that mission.”

Thomas’ death was one of four at the jail last year — including an inmate’s newborn. “Obviously we’re concerned about that at any institution, and we’ll look at what the reports are,” Walker said. Asked whether he thinks Clarke has done a responsible job in running the jail, Walker said he’s “not in a position to analyze that,” based on media reports he’s read.