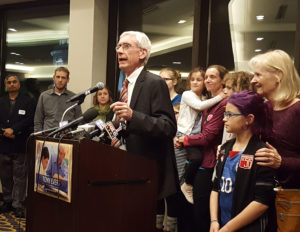 Less than a half hour after the polls closed, the Associated Press projected Evers as the winner of the race. Unofficial returns showed him with a more than two to one margin of victory over Holtz. Reacting to the victory with supporters in Madison, Evers asked “Am I glad it’s a big win? Hell yes!”

Evers said that he thinks he won because of the people at the local level, who have voted during the last two elections to raise their own taxes to keep their public schools strong. Dozens of districts around the state were again holding school referenda votes in Tuesday’s election, to raise revenue for operating expenses or new building projects.

Evers said his priorities will remain focused on getting more money for schools and getting more resources for helping students who suffer from mental health issues. He also called for changing the rhetoric surrounding teachers, warning that continued attacks on the profession could lead to the largest teacher shortage the state’s ever witnessed. “We can’t go back to the days where if you can breathe, you can teach…we can’t dumb down this profession because we’ve created the situation where people are either leaving the profession or not entering the profession,” he warned.

Holtz, who was with supporters in Pewaukee, said he really hopes Evers will now “step up to the plate” and listen to what the public was saying during the campaign. “I really hope that we raised issues and awareness that parents don’t ever have to put up with failing schools, businesses should never put with failing schools, and our communities shouldn’t put up with them,” he said.

The race for state superintendent was the only statewide contest on the ballot Tuesday. State Supreme Court Justice Annette Ziegler was running unopposed for a second ten year term on the bench.