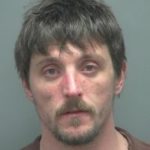 Joseph Jakubowski made his initial federal court appearance the day he was captured last Friday, and was charged with the theft of two firearms and two silencers.

The U.S. Attorney’s Office in the Western District of Wisconsin Wednesday charged Jakubowski with the theft of 18-firearms, and two silencers from Armageddon Supplies in Janesville on April 4th, and for being a felon in possession of firearms.

The man accused of sending a 161-page manifesto to the White House has also been charged with burglary and theft in Rock County Court.  He’s currently being held on $30,000 cash bond.  Jajubowski is also scheduled to appear in both federal and county court next Tuesday.