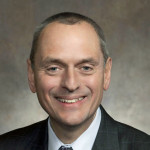 New Berlin state Representative Joe Sanfelippo is drawing criticism from some Milwaukee Democrats — after warning that the city’s crime problems are starting to spread out to the suburbs. Sanfelippo and state Senator Leah Vukmir are proposing eight bills that would strengthen penalties for carjacking, and allow judges to impose longer sentences on juvenile offenders.

The Waukesha County Republicans held a press conference Wednesday in West Allis. “Our residents here now are very fearful that the crime wave is going to continue out in the suburbs,” Sanfelippo said. “This is the next front.”

“More GOP fear mongering isn’t what we need to address the epidemic of gun violence that has victimized my community for far too long,” said state Senator LaTonya Johnson, a Milwaukee Democrat, in a tweet..

Sanfelippo claimed that one suburban police chief compared Milwaukee’s current approach towards juvenile offenders to an old TV show. “Our juvenile code was written for Wally and the Beaver, and that’s not who we’re dealing with these days.”