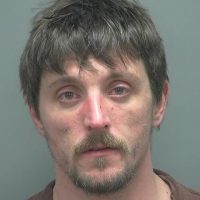 The Janesville man accused of stealing multiple guns and eluding police for more than a week has pleaded not guilty to burglary and theft charges in Rock County.

Rock County Sheriff’s Detective Ronald Bentley testified at a preliminary hearing Tuesday for 32-year-old Joseph Jakubowski, who is accused of breaking into and stealing weapons and silencers from the Armageddon Supplies gun store in Janesville. Bentley described video of the break-in, an indicated blood found at the scene was linked to the suspect.

A court commissioner found sufficient evidence to have Jakubowksi bound over for trial.

Earlier in the day, Jakubowski appeared in federal court in Madison, where not guilty pleas were also entered to federal charges that he stole 18 firearms and two silencers, and had them in his possession as a felon.

Jakubowski was arrested earlier this month, after he was found camping on private property in Vernon County. Police has been searching for him for 10 days at that point, fearing that he might have stolen the guns to carry out a mass shooting because of a long anti-government manifesto he had mailed to President Donald Trump.