You are here: Home / Sports / Late rally falls short for the Bucks (AUDIO) 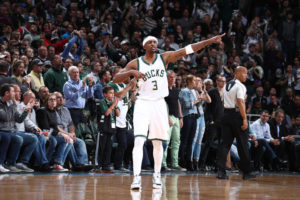 The Bucks took a two point lead with 2:29 left to play.  From that point, Toronto went on a 9-0 run to reclaim the momentum they had lost.

DeMar DeRozan had 32 points to lead the Raptors, who advance to the second round to face the Cleveland Cavaliers.

The Bucks still had a chance to force overtime, but instead of looking for a tying three-pointer, Antetokoumpo dribbled too much of the clock of the way, then drove for a dunk with 3.5 seconds left.  The Bucks fouled DeRozan, who made both free throws to go back up by three.

The Bucks were out of timeouts and their inbound pass was stolen, which is how the game ended.

AUDIO: Matthew Dellavedova says they missed too many opportunities :12