You are here: Home / Legislature / Lawmakers hope to help the homeless 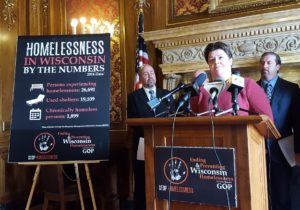 A package of bills being introduced at the Capitol seeks to provide more help to the state’s homeless population.

Carrie Poser with the Wisconsin Balance of State Continuum of Care, a group that works with the homeless, said during a press conference Wednesday at the Capitol that the proposals will provide an opportunity to help the estimated 5,800 people in the state who are without a home, on any given night. She said it will allow them to “bring the right people to the table, to access more and different resources, and to try alternative approaches.”

The legislation is facing some criticism though from Democratic lawmakers. State Rep. Melissa Sargent (D-Madison) called the bills a “cosmetic solution” to an epidemic in the state. “This is just another legislative agenda item Republicans can check off their list, pat themselves on the back for, and tell the people of Wisconsin they tackled the tough issues when they’re running for reelection, meanwhile not a single piece of this legislation will do anything to help someone who’s sleeping on the street tonight,” she said.

While one of the bills does try to help the chronically homeless access housing vouchers, Assembly Republican Leader Jim Steineke did admit during Wednesday’s press conference that the legislation does not address a shortage of Section 8 housing in the state. “Obviously it is something that we’d like to see worked on,” he said. “That’s a longer term problem that we have to try to find a way to address.”